A Nigerian doctor identified as @drpenking  on Twitter has narrated how an 8 months pregnant woman who had a confrontation with her husband today July 1, chopped off his manhood. 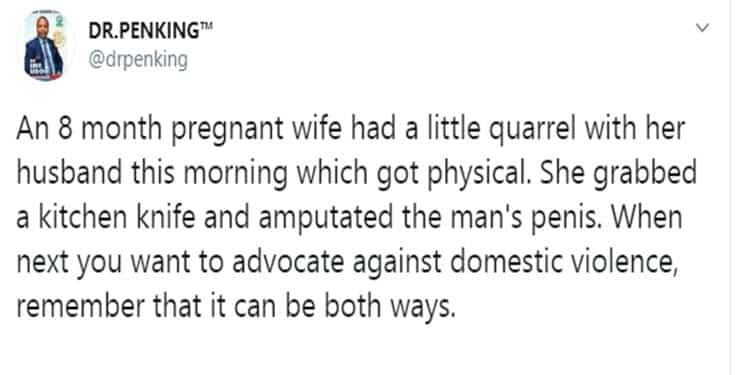 The young man disclosed that the pregnant lady chopped off her husband’s manhood after their quarrel got physical. The doctor reiterated that domestic violence goes both ways.

8 months pregnant woman had a little quarrel with her husband this morning which got physical. She grabbed a kitchen knife and amputated his penis, when next you want to advocate against domestic violence, remember that it can be both ways.

Previous: Regina Daniels and husband welcome’s a bouncing baby boy few days after her baby shower.
Next: This cute baby is not my child- Regina Daniels speaks on a viral photo of a baby

Hi dear, am Riri the beautiful mind behind this blog. I really have passion for writing but I know am not great at it yet, and am working very hard to become a better writer thanks for visiting my blog.

Lady Arrested For Pouring Hot Water On Her Stepsister In Kogi.

Drinking Is Not A Sin, Scripture Allows You To Use Your Tithe And Buy Alcohol. Reno Omokri

Man Arrested After A Friend Who Came Visiting, Committed Suicide In His House.

Hushpupi To Remain In US Jail After His Lawyer’s Effort To Bail Him.